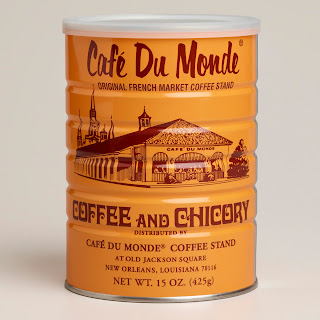 Probably the most famous chicory coffee!

So I have a adoration for coffee.  Been drinking the stuff since I was five.  I would go around with my great-grandmother to visit other nice southern ladies, and they would always give me a little coffee while I sat with them.  Several years were spent working in coffee shops before and after graduate school.  Even on my last trip abroad I took a photo of every cup of coffee I had along the way.  So for my first series of articles I chose to focus on my favorite beverage created in traditional southern ways. The first topic on my list is chicory. 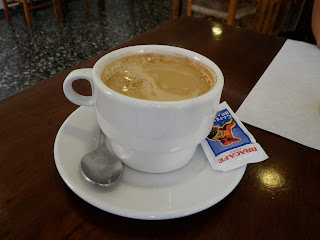 Chicory is a rooted plant not much different than a carrot.  It is dried and ground when blended with coffee.  Most dark roast coffee is served with chicory from New Orleans to Mobile.  Many famous coffee houses like Cafe Du Monde in New Orleans are legendary for their chicory brews.  Ray Thompson who wrote daily for years for The Biloxi Daily Herald stated, “The charm of chicory is the bold, distinctly different taste which it gives coffee – a taste which first annoys, then tempts, and finally turns you into one of those ardent devotees who think pure coffee is dish water.” (1)

Advert from the Times-Picayune

More the interesting than the flavor and texture of chicory coffee, is the history behind it.  As a way to ration coffee during the Civil War, southerners added chicory to coffee in order to make their stores last longer.  Since those days we have always enjoyed it in our “dark” roast coffee. (2)